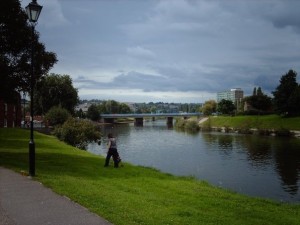 So then, last Saturday I left for Exeter where I stayed for the weekend. A damn nice place: hell loads of history, stuff to do and a beautiful scenery all around the city! Also the promenade along the River Exe is one of the nicest I have seen so far.. The place is not all that overcrowdedly touristy tourist trap kind of thing but yet quite holiday-ish. They’ve got lots of free guided tours round the city with some wicked old local chaps who’ll with glowing eyes tell you more than you’d ever wanted to know about this place. Also it seems there are amazingly many fit women around… and the best, the vast majority of tourists actually was British. Mmm, didn’t really want to leave – but well, what’d this be about if I wouldn’t? 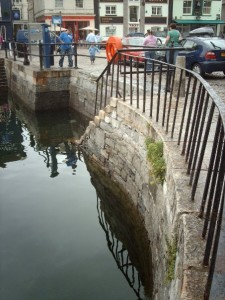 So subsequently to exploring Exeter I spent a day in Plymouth. A little shock here, it was so totally different from what I had expected at first. Plymouth is very diverse I think.. The Barbican, or harbour area, with asontishing resemblance reminds of the opening sequence of Monkey Island, mediaeval in it’s impression and with its wound alleys reaching out to all sides but well kept and restored.. Arr! I wanna be a pirate sometimes. There’ve been tourists like swarms of mosquitos all around but that might’ve had to do with it having been a bank holiday Monday and – of course – ’cause Plymouth is just so incredibly touristy. Behind The Barbican, towards the city centre, they just start prepping things up it would seem, they’ve pulled down a couple of houses and are getting up a few nice modern ones; however, there is no way you wouldn’t notice all the dull and run-down blocks they put up after WWII. Then there is Coxside opposite the Barbican which is a nice and neat residential area I think, everything seems quite new here and apart from parents pushing their children on the swings there’s not much going on… Also I had a little go on the naval base which was amazing as well.. I never saw that big a battleship before, let alone the submarines.. Probably one of the most diverse cities I’ve ever been to and I certainly got rid of that romantic misconception of Plymout that I harboured.. though I still would go for the Mayflower as well as the Pirate thingy..

Right now I’m in Penzance, on the Penwith peninsula down in Cornwall.. it’s a lovely little town with the massive Mount Bay ashore. Yesterday I walked to Marazion and had a little preambulation atop Saint Michael’s Mount (wonderful castle, splendid view!) and learnt lots about the historic relevance that Cornwall had militarily – apparently. For tomorrow I plan on going surfing near St Ives and after writing this I’ll go walk the coastal path down to Land’s End. I’ll probably write again from Cardiff or Swansea (the next two cities I aim at visiting, respectively) and perhaps I might get around to putting up some pictures as well then..

Alright now, I’ll go have some fun round the coast!